Brave Where You Are 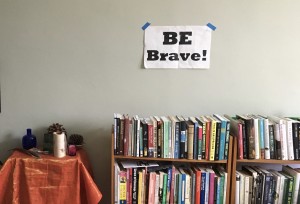 A prop from an EQAT action pressuring PNC

For those of you who have been around here awhile, you may have noticed that I skipped the July issue of this newsletter. That wasn’t so much a conscious choice as the result of burying my mind in the book I’m working on, while having five people and several home improvement projects happening in my house this summer. I just looked up, and it’s mid-August.

Still, my head hasn’t totally been in the sand. I have noticed that there is a lot going on in our world. A lot that is heartbreaking and calls out for a response. A lot that won’t be solved with one election. In fact, I have a growing sense that things are going to get worse before they get better, and not just in the US. To me, this is not cause for frantic reaction, but motivation to dig even deeper into the question, What am I called to do? One of the things that keeps coming to me is a sense that I need to build my courage muscles.

So, I’ve been wondering what it looks like to be “brave at my computer,” as a member of my support committee put it. (Quakers have a wonderful process where you can ask for support and accountability from your congregation to follow a hard calling.) For me, being brave at my computer has meant clarifying what I want to say, especially the bits that might get me criticized. Or more accurately, facing the fact that a book about the intersection of racism and climate change by a white woman is going to get criticized. Working through my fears about that might be part of why writing it is taking longer than my previous books. I started with the safer aspects of my topic and have been gradually digging deeper, each draft uncovering another layer. Excavating is slow work, but I also feel a sense of urgency about actually getting it out in the world, which is why I’m now finalizing a proposal to send to agents and editors. Prayers or good vibes to find the right midwives for this project are welcome!

The phrase “brave at my computer” has reminded me that bravery takes many different forms. For Toni Morrison, it was writing about Black life without editing or explaining for white audiences. Her work was liberatory for so many, something that struck me when I saw the film about her last month. It was an important reminder because writing feels a little self-indulgent at the moment, with children in cages and the clock ticking on meaningful climate action. My friends Walter Hjelt Sullivan and Lee Smithy were physically brave during EQAT’s recent banner drop off of PECO’s roof, which also inspired me and reminded me that I want to keep building my own courage muscles. (For those new here, EQAT is the climate justice group I do most of my activism with, and PECO is our electric utility.)

I’m not sure what we’re all going to be called to do in the coming months and years, but I’m pretty sure it’s going to stretch us. Just now as I wrote this, a man was speaking way too loudly on the phone in my co-working space. After a few minutes of silently complaining (I’m trying to write about courage here, dude!), I realized the irony and went over to him. Acknowledging that I hadn’t seen him around before, I politely pointed out the phone booths nearby. He said he didn’t know about them and moved his conversation. This was such a simple exchange, but a few years ago, I would have stifled my irritation, as all the people around me did. Today I spoke up, partly because he really was distracting me, but partly because it’s become clear to me that we won’t be able to speak up about the hard things if we dodge the simple ones. And I still need all the practice I can get.

Bravery looks different for different people. My friend Rev Rhetta Morganrecently told me that just getting out of bed every day and being her authentic self was brave enough for her. She’s been through a lot in her life that she had to push through and heal to get to authenticity. Amen. Facing our demons, our internalized oppression, our fears of rejection and criticism, these are all part of living a courageous life, whatever form that takes for you.

The thing is, I’m not sure how many of us are really down for living a courageous life. It’s not what our egos want, or usually our parents. So much of what we are encouraged to do is about keeping us safe. When I first started giving a lot of talks to Quaker gatherings, I spoke about EQAT and what I had learned about non-violent direct action. People loved hearing those inspiring stories, but I’m not sure how much of what I shared was ever applied. I still weave EQAT into my talks, but this summer as I prepared for two plenaries, I felt that what people really needed to hear was encouragement to follow their own callings, to do so boldly, and to foster mutually supportive community. Of course, these aren’t just Quaker needs. And they are not just needs for this political moment, although I feel them most acutely now. I’d love to have more people doing direct action—and plan to teach about it again in October (stay tuned for announcement with early discount!). But more than anything, I want my writing, my teaching, and my life to be liberatory, as Toni Morrison’s life was.

Today, that’s what I wish for you, too.