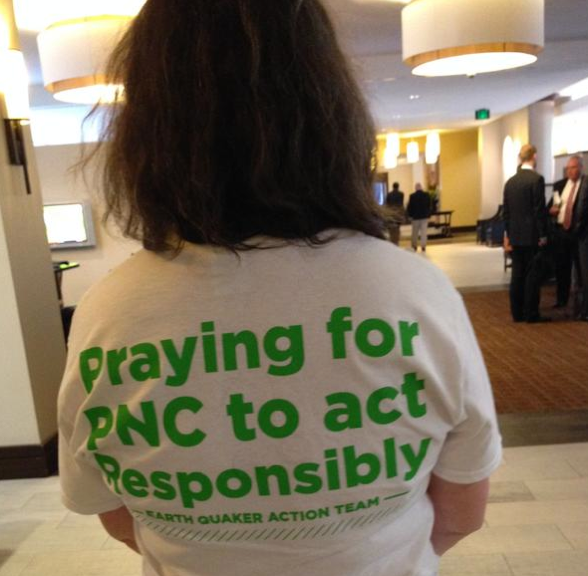 Direct action is never quite how you practiced it. At the run-through the night before the PNC annual shareholder meeting in Tampa, Florida I was one of several people who role played how we planned to stand up during the meeting, take off our business jackets to reveal t-shirts that said, “Praying for PNC to act responsibly” on one side and “No $ for Mountaintop Removal” on the other. Then we planned to close our eyes and pray for the duration of the meeting or until they kicked us out. As we debriefed the role play at the St. Petersburg Friends Meeting, I said how comforted I felt by the grounded woman standing next to me—so it was ironic that when the real moment came, I had to stand in the meeting alone, which turned out to be a deep spiritual experience.

The previous year, members of Earth Quaker Action Team (EQAT pronounced “equate”) interrupted PNC Bank’s annual shareholder meeting so powerfully that the CEO shut it down in seventeen minutes. We didn’t want to try to top that, so we knew from the start that we wouldn’t be doing exactly the same thing. But when PNC Bank moved their 2014 meeting to Tampa, Fl—which happened to be a city where we had allies eager to work with us—it was too good an opportunity to pass up. The global group SumOfUs raised the funds so a few of us from Philadelphia could head to Florida to train and organize a wonderful, intergenerational group of Quakers who acted quickly to take advantage of this moment of what Quakers call “way opening.”

PNC was clearly concerned about a repeat of last year. Maybe the PNC execs just wanted to golf in Florida, but it seems more than a coincidence that they picked a state where it’s a second-degree misdemeanor to interrupt a meeting. Even carrying a sign during a meeting is illegal in Florida, and the PNC shareholder materials spent a lot of ink listing the many things you could be kicked out or arrested for. One thing they didn’t mention was praying, so given our recent powerful experience of silent worship during our civil disobedience against the Keystone XL pipeline, we agreed that a silent witness would serve our purpose, which was really just to tell PNC that we had not gone away and that we’d be back July 3, when we will be organizing a major action at their corporate headquarters in Pittsburgh with Quakers from across North America.

Most of the group of 26 held a rally on the sidewalk outside the hotel where PNC was meeting, which Sam Shain turned into an opportunity to teach the Florida Quakers street-speaking. Nine of us planned to enter the meeting with proxies from PNC shareholders. Hannah Jeffrey planned to read a statement during the final question and answer period. When we arrived in our business attire (looking quite spiffy I must say), we found that PNC staff were recording our addresses and excluding most of our proxies on a technicality that they had not enforced during the previous three shareholder meetings that we had attended. Because the shares my proxy represented were not bought through a broker, I was exempt from the additional paperwork requirement and cleared to enter the meeting.

EQAT Coordinator Matthew Armstead, who planned to negotiate with security on behalf of everyone else, had the same kind of proxy I did and thought he would also get into the meeting, so he urged me to wait for him before standing up. However, as soon as I entered the meeting and walked to an empty seat by the center aisle, it was clear that it was moving at high speed. Since cell phones had been banned I didn’t have a time piece, but it felt like I was only a little bit late, and they were half-way through their short agenda. Glancing toward the door for Matthew, I knew in my gut that I was on my own, so I tried to take a deep breath and center.

A week earlier, I had been pretty nervous about my role as the person who would stand up first and had asked a few F/friends to hold me in prayer. When the moment arrived, however, I didn’t feel at all afraid of standing before the PNC CEO and other executives, who were on an elevated stage at the front. I wasn’t even afraid of getting arrested since it would be such a public relations disaster for PNC if they arrested someone for praying, especially in the south. All my nervousness had to do with the question of when I should stand up. I had emphasized during our training that this was not some kind of skit. It would really only feel powerful if we were actually praying, and I wasn’t sure if I could do that well while dealing with security, which I would have to do if Matthew wasn’t there as a buffer.

As I tried to think this through, PNC started playing an inane video, so most of the room was dark. If I stood then I might not be seen at all. It came to me that with such a short time to make my witness, I should at least pick a symbolic moment, so I decided to wait until after they announced the expected rejection of the Boston Common shareholder resolution, which asked them to count the carbon cost of their investments—not the same as our demand that they stop financing mountaintop removal coal mining but related. Waiting for that moment would also give Matthew one more minute to get in, if he was going to.

They called for proxy votes and announced the resolution was rejected almost in one breath it was so quick. I had unbuttoned my pin-stripe jacket, so as PNC Secretary Christi Davis finished her report, I stood, pulled off the jacket and scarf that had been hiding the green words on my white t-shirt, and closed my eyes. It seemed to be moments later that CEO Bill Demchak called the meeting over with no questions or comments from the floor, which had been the final item on the agenda.

With my eyes closed, I felt a man (the chief of PNC security, I believe) step behind me. “I need to say hello to a friend,” he said to someone ahead of us who was seeking his attention, but he said nothing to me as I continued standing in silence, hoping that as everyone else filtered out of the room they would at least notice I was there and read my t-shirt. At first I listened to hear if I was getting any reaction, but then I remembered my insistence the night before and that morning in the parking lot that we should really try to pray, so I tried to focus.

Despite having written a book on the Serenity Prayer, I’m actually not that confident about praying. I get distracted easily and don’t believe in telling God what to do, so I usually pray for something vague like “the best possible outcome,” when I pray over a specific situation. Hannah Jeffrey had lead us in an exercise the night before to help us stay grounded in this exact moment, but what came to me vividly in that hotel conference room was not the people praying for me back in Philadelphia—who I had planned to use as an anchor—but Dustin White and his West Virginia mountains.

It had been just about a year earlier that Dustin had driven me out to see mountaintop removal for myself. I was aware that he spent a lot of time driving people like me around, outsiders who could put the poisoned water out of mind once they went home if they wanted to. I had wondered what I could do to make my visit worth Dustin’s while. The blog post I wrote afterward didn’t really seem to do it justice. But standing in that posh Florida conference room with my eyes closed, I knew I was inextricably linked to Dustin and his mountains, to Maria Gunnoe and Junior Walk—other Appalachian allies of EQAT—as well as to my friends in southern Africa, where climate change is already diminishing the crops and making the weather weird. We are all One. Feeling that connection is actually my understanding of gathered Quaker worship. It is also our fundamental message to PNC in a way—that they can’t separate themselves from the consequences of their business decisions. So the tactic and the witness felt united in that moment. 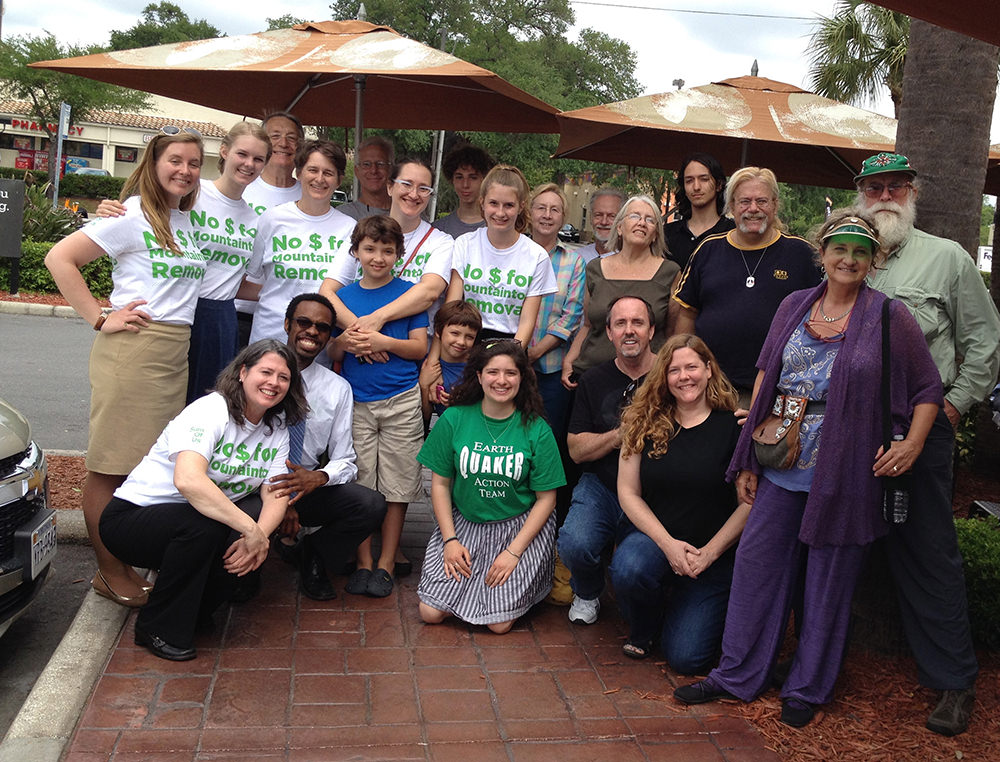 When it sounded like most people had exited the room, I walked out and found that those who had been denied entrance were also standing with their t-shirts visible in a silent line that shareholders had to walk past because PNC had made everyone come through one door. After another minute of standing in worship together, we all walked out to join our more raucous friends picketing outside the hotel. At the debrief afterward it was clear that forging wonderful connections had been a theme of the day. These Florida Quakers from seven monthly meetings (congregations) had never worked together like this before and vowed to do so again. Sitting under the umbrellas at Panera, we discussed how we could build on the Florida-Pennsylvania connections, too, especially as we head toward the national Gathering and our action on July 3. That work of strengthening connections is already moving forward.

Although I initially wondered if I should have stood up sooner, I realized as soon as I spoke to a reporter that it sounds pretty kick ass on my part that they shut down the meeting as soon as I stood up. In fact that framing started circulating immediately, and we quickly revised the first version of the press release to take out that implication. It’s important to me that we be accurate since it seems quite likely to me that the meeting was on the verge on ending anyway, not because of my presence in the room but because of EQAT’s ongoing witness around the issue of mountaintop removal. PNC’s annual shareholder meeting wasn’t ended by me. They rushed themselves through in fifteen minutes (even shorter than last year and much shorter than previous years) because of us.

In the end, I didn’t feel alone at all.