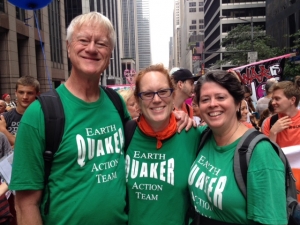 Friday morning I did an author interview with religion journalist turned publisher, David Crumm, for his online magazine Read the Spirit. As someone who reads many memoirs, David suggested I write a blog post about what has happened in my life since the end of Renewable, for those who are curious. I thought it was a good idea, so here are some updates on me, Earth Quaker Action Team, and the wider climate justice movement.

We are still living in “the house,” and I still have too much e-mail in my in-box, though now I’m interested in more of it. My family has adjusted reasonably well to my life of activism. Tom has picked up a lot more on the home front, though helping our oldest apply to college added a new project to our plates. I am so glad I quit that teaching job at University of the Arts every time I hear a teacher friend complain about grading. Last winter, I got clear that it was also time to stop teaching Discerning Our Calls at Pendle Hill, though a few months ago I agreed to join the faculty of a new Pendle Hill program, Answering the Call to Radical Faithfulness, which aligns more closely with the activism and writing I am now doing.

When the memoir ends, I had joined the board of Earth Quaker Action Team (EQAT) and was taking on more leadership responsibility. Since then, I’ve become the clerk (or chair) of the board, which has been an incredibly growth filled experience. Those gifts I was yearning to use continue to develop, from seeing the connections between things to facilitating groups. (The second time I got arrested protesting Keystone, I led icebreakers and singing in jail.) That part of me that wants everyone to like me is often challenged, but it’s a good challenge for someone learning to be a leader.

The biggest thing professionally has been writing Renewable and getting it launched on March 3, one day after PNC Bank announced that they are phasing out financing of companies engaged in mountaintop removal coal mining. It’s been an amazing experience of “way opening” for me personally since I had an intuition to push for a March pub date. More importantly, the win has been a wonderful boost to EQAT and allies who have been following us. (Here’s an article I wrote for Huffington Post on what I see as the significance.)

More broadly, the climate justice movement continues to grow. Less than two years after the cold Forward on Climate rally that ends Renewable, ten times the number of people—400,000!—joined in the People’s Climate March, led by the world’s indigenous people. The verdict is still out on whether it will be enough to avoid catastrophic climate change. Often good news and bad news seem to go together. For example, South Africa’s investment in renewable energy has taken off since my visit there, though they have also lifted the moratorium on fracking exploration and continue to burn a lot of coal.

Still, I remain far more hopeful than I was at 49 when I felt helpless and alone. Traveling on book tour is affirming my sense that many other people are open to a different way of living, too, and that together we can build it.