I Learned So Much on the Frontlines of Line 3 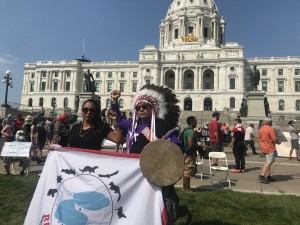 Thanks to everyone who sent prayers or funds for my two recent trips to northern Minnesota. (If you missed the story of why I went, check out this video by Winona LaDuke on Line 3.) I felt very supported and grateful for this community! I’m also grateful to the community that took me in, the Red Lake Treaty camp, founded by Sasha Beaulieu and her partner Roy pictured above at the state capital.

In this report, I will share more about what I learned, especially on the spiritual level, but first I want to let you know that I will be leading a Zoom session (hosted by Quaker Earthcare Witness but not just for Quakers) on what we can do to Stop Line 3, even though the pipeline is pretty much built. The answer is, there’s still a lot!

You can register here for the session next Wednesday, September 22 at 7:00pm eastern.

So, what did I learn? One of the most moving things to me was how the spirituality of the Anishinaabe leaders and other Indigenous people didn’t feel separate from their activism, or from anything really. Of course, there were explicitly spiritual practices — like the sweat lodge, smudging people with sage, and singing and drumming prayerful songs in action. But their worldview of interconnection was also expressed in everyday conversation through the terms “relations” or “family,” referring to Indigenous from other nations, non-Indigenous people, and members of the animal world.

One nonviolent direct action really exemplified this. Indigenous people planned to pray, sing, and drum on rafts on the part of the Red Lake River where Enbridge had already installed the pipeline, while a few of us went up onto Enbridge property. As we headed toward the river, an eagle flew overhead. As we boarded the wooden rafts, we saw an otter bobbing just ahead of us and a turtle perched on a rock. Several of us saw spiders right next to or on us. By this time, I had been camping near the Red Lake River for nearly three weeks but had never seen this confluence of animals. When I told a Red Lake Nation elder later, she nodded unsurprised and explained that the eagle, the otter, and the turtle were three of their clan animals. Later I heard that a hummingbird had flown into the tent where the young Indigenous leaders were planning the action and was told that the speedy bird was known to travel back and forth to the spirit world.

In Citizen Potawatomi author Robin Wall Kimmerer’s beautiful book Braiding Sweetgrass, she relates that she often asks her botany students how many love the Earth. Every hand goes up. Then she asks how many believe that the Earth loves us back. They squirm awkwardly. They were taught to think of the Earth as passive, just as I was, and that conditioning goes deep. The idea that the Earth loves us back blew me away when I read it, and it came back to me after the action on the river (the only one on that Enbridge site where no one was hurt). Only the day before I had reread Kimmerer’s account of the Anishinaabe prophesy for this time, which says that humanity will have to choose between the green path and the cinder path. Kimmerer asserts that beings from the more than human world will help us in this choice, since they want to live, too. I had somehow missed the significance of this assertion the first time I read the book, but after the action with animal participants I felt both humbled and encouraged. I thought of myself as pretty open to mysticism; I am a Quaker after all. But really my understanding of what’s possible has been narrowed by a worldview that sees the rest of Creation as inanimate.

The more general lesson from this is that there is more available to us, especially those of us who are involved in faith-based activism. Although I’ve experienced profound spiritual grounding in action before, including in interfaith settings, I think that we sometimes invoke our faith more for the PR benefit, the moral authority it conveys or the striking visual of having clerical garb in the photos. After my experiences on Line 3, I find myself wondering how our activism might change if we really embodied the deepest teachings of whatever tradition we come from, if we acted as if a greater spiritual force had our back and might part the sea for us. I think we’re going to need this kind of faith to make the major changes needed in the next ten years, as the Intergovernmental Panel on Climate Change says we must.

Humility was another lesson for me this summer. It’s one of the seven major teachings of the Anishinaabe, and by my second trip, I had figured out that doing a job with humility was just as important as getting it done. This was a helpful learning, since there are a lot of jobs at camp, from cooking and doing dishes to cleaning the pit latrines and sitting at the camp gate to welcome and screen newcomers. I could feel in myself and in other white people the desire to prove ourselves, to make sure everyone knew we were doing our fair share, to seem knowledgeable, even when we weren’t. This energy, of course, was not actually helpful. When I got sick on my second trip and had to schedule in rest time, I became more aware of this desire to be valuable through doing. In retrospect, I think my most helpful roles at camp in August were not on the jobs board, but had more to do with being a calm presence during moments of conflict.

There’s so much more that I’m still processing, especially around what it means to prioritize the common good in community, but all of it feels very much aligned with the book I’ve been writing, which I’m working on again, even as I try to stay connected to the Line 3 campaign and encourage others to do the same.

One place I plan to show up is the People vs Fossil Fuels week of action in DC from October 11-15. Let me know if you plan to be there.

Thanks again for staying connected here.