Arrested for Telling the Truth 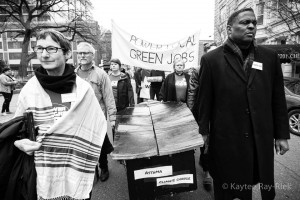 Both photos by Kaytee Ray-Riek, who was also an action lead

Yesterday I was put in handcuffs by the Philadelphia police and led, wrists behind my back, out of my local electric utility customer service center and into a waiting police van. My crime? Sharing the truth about solar energy with my fellow PECO customers and refusing to leave when the utility got nervous about it. This wasn’t the original plan, but direct action often doesn’t go according to plan, so I was grateful to be with a group ready to follow where Spirit led us.

Intentionally scheduled during a week held sacred by Christians and Jews, the religious tradition of righteous protest was an important part of this direct action. We began by gathering at a Unitarian Church a few blocks from PECO, an investor-owned utility that has been dragging its massive heels in moving toward renewable energy, purchasing only 0.25% of its default energy from solar. For two and a half years, we’ve been pushing them to make the leap into the 21st century by committing to 20% solar by 2025, creating jobs and energy savings for the local communities that need them most. After two and a half years of corporate excuses, we felt called to increase the pressure by committing civil disobedience, and so members of the Power Local Green Jobs campaign gathered to prepare.

Although I had taken a walk in the Wissahickon woods that morning to ground myself for my first act of civil disobedience in four years, I also felt a strong desire to pray with others, so I picked a corner of the large church basement and announced that anyone was welcome to join me. While the majority of the group scurried around, collecting the valuables of those risking arrest and assembling the cardboard coffin we would carry to PECO, several of us sat on metal folding chairs in a gradually growing circle of silent worship—members of Earth Quaker Action Team along with a minister and a rabbi from POWER, EQAT’s partner in this campaign. Despite the buzz of activity around us, I felt we were in a circle of calm that stayed with me through the day.

After a grounding exercise with the entire group, sixty of us, dressed in black, filed out of the church basement, six of those risking arrest carrying the black cardboard coffin labeled with what we were mourning—asthma, poverty, environmental racism, and climate change. The theme of mourning shaped the program once we arrived at PECO, where the doors to the main lobby were barred, so we gathered instead on the plaza outside to hear how people in a local African American community are dying from the pollution of the nearby oil refinery. Three rabbis said kaddish, the Jewish prayer of mourning, while the rest of us placed stones on the coffin. We watched an amazing interpretive dance while Rev. Rhetta Morgan—one of the day’s organizers and a fellow EQAT board member—expressed our grief through heart wrenching sounds. Knowing how climate change is already killing people in Africa, I was personally touched that Rev. Linda Noonan led us in singing Senzenina, a South African struggle song that means “What Have We Done?”

After I explained that the vast majority of the asthma inhalers we were carrying in to PECO came from just one school in North Philadelphia, the seven of us risking arrest strode away from the crowd and the locked lobby doors, and into PECO’s nearby customer service center, whose revolving door had remained open so people could pay their bills. An intergenerational group, we lowered ourselves onto the carpeted floor with varying degrees of ease, making a circle around the asthma inhalers as we took up our song sheets and launched into several classic protest songs—“Ain’t Gonna Let Nobody Turn Me Around,” “Step by Step,” and “This Little Light of Mine,” which we unsuccessfully tried to sing in sync with the crowd outside as we caught snippets of their voices through the revolving doors.

Despite the row of police outside the doors and the Civil Affairs officers that lurked in the corner of the customer service center, we began to realize that they were in no hurry to arrest us. As we settled in for what looked to be awhile, John Bergen—a Mennonite Associate Pastor and EQAT board member—suggested that we share who we were carrying with us. He started with a story of someone whose life was cut short because their family couldn’t afford prolonged medical care. Rev. Greg Holston—POWER’s Executive Director—followed by sharing how the stories of environmental racism told on the plaza had resonated with him, how the African American neighborhood near the refinery where he had first served as a preacher had lost many to weird cancers, and how many people in such communities didn’t make the connection between their suffering and dirty fossil fuels, let alone the choices of their utility.

As Rev. Holston lamented this lack of understanding among his people, I suggested that he stand up and preach to the room of Black and Brown folks waiting in the rows of chairs behind us. While the idea naturally grew out of the sharing we were doing within our own circle, it also turned out to have a few tactical advantages. First, it gave us the chance to address the information gap Rev. Holston had named while reaching more of the people our campaign was designed to serve. Second, it was a way of escalating the situation, putting the police in a dilemma (two of the concepts I teach in my How to Build a Nonviolent Direct Action Campaign online course.) Instead of just waiting until closing time, when the police would eventually have to arrest us, we took the initiative, stood up, and moved toward the rows of seated customers.

“I bet some of you are wondering what we’re doing here with all this singing,” I began.

“Uh huh,” came a quiet voice. The woman sitting directly in front of us pulled out her phone and began streaming live to Facebook.

Standing next to the flat screen television, I introduced Rev. Holston, who launched into the story of his daughter’s frightening asthma attacks and how he didn’t realize what was causing them until his family moved away from the oil refinery, and she miraculously recovered within two weeks. Soon a PECO security official approached and said, “I’m sorry Reverend, you can’t speak to our people,” an ironic turn of phrase since the Reverend felt he was speaking to his people. I pointed out to our now attentive audience that we were all PECO customers, and Rev. Holston resumed his story, recounting the dangers of dirty energy, and PECO’s refusal to make a serious move toward solar. I think it was around the time he told the now rapt audience that PECO nets a million dollars a day that the police announced they were going to arrest us if we didn’t leave.

Realizing that the arrests might be frightening for the waiting customers, I explained that we were taking this risk willingly, in the tradition of the Civil Rights Movement and the Movement for Women’s Suffrage. Also, we didn’t just begin by sitting down in the lobby. We’d had meetings with PECO. We’d been telling them for 2 ½ years that solar would not only be healthier for our communities, it could create good paying jobs for our region. “We don’t want you to be arrested,” said the woman who was filming.

Rabbi Julie Greenberg jumped in to share the conversation she’d been having with one of the nearby customers, who had chronic lung problems resulting from the exposure she faced living in coal country. “I know what you’re talking about,” the woman said emphatically. 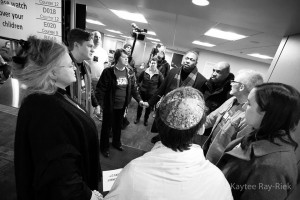 The police gave us a second and then a third warning, and the seven of us held hands in a circle for one more song. Then, suddenly, we were surrounded. A policewoman asked me to put my hands behind my back, the part of this day I was dreading, since my right shoulder never fully recovered from an injury a few years ago. I mentioned the injury to her, and she slid the plastic cuffs on loosely, checking that I was not in pain, which I appreciated. When they had the seven of us in cuffs, we were led out the glass doors and past the singing crowd. We were led to white police vans, segregated by gender, and warned to watch our heads as we climbed in to take our seats on narrow metal benches.

Among the four women scrunched together, Linda raised how politely we were being treated—and how many people did not have this experience with the police (a topic I’ll say more about on another day). As we suspected, we were not held long—basically given a citation and then released with instructions to walk away from PECO, which we did, heading back to the church for a bit of storytelling and reflection, as well as announcements about today’s action, a day of vision featuring children back on the PECO plaza.

As I reflect on my own vision for the future, I believe I saw glimpses of it yesterday. People of different faiths and races coming together to mourn and act, grounded in a sense that, despite the difference in our vulnerabilities, we are in the end each other’s people. Taking initiative and speaking truth, even when that truth is threatening to power. Failing to disperse—the official charge on our citations—because we know that we’re stronger together.